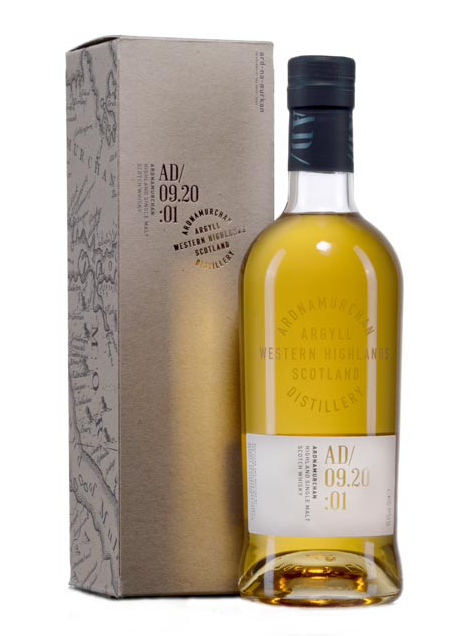 A week ago, I had the pleasure of attending an Ardnamurchan tasting with Daracha and Graeme Mackay from Adelphi. We were tasting the Ardnamurchan First AD Kit, containing AD/09.20:01, 2015 Ex-Oloroso Peated Cask, 2015 Ex-Bourbon Peated Cask and 2014 Single Barrel Finish Ex-Champagne Cask. The first of these four was the inaugural release from Ardnamurchan, AD/09.20:01, and that is the one I am focusing on in this post.

AD/09.20:01 is a combination of unpeated and peated whisky, matured in bourbon casks and sherry casks. I have promised myself to stop proclaiming that peated whisky is not for me. Even though the AD/09.20:01 only has a mere 18 ppm, it is still peated, and I must admit that I find it quite enjoyable.

I am impressed with what Ardnamurchan have done with this five-year-old spirit, and of course, also excited to see what the future has in store for them. Oh, and the aesthetically pleasing design of the bottle is worth mentioning as well.

Nose
The nose on this whisky is both intriguing and appealing to me. I am finding notes from the new make, lots and lots of honey, citrus, wood polish, something reminding me of orchard fruits without being as pronounced as I am used to from other whiskies. The peat is quite apparent on the nose – it has that distinct aroma of burning damp wood, as opposed to dry wood, followed by vanilla, caramel, and a floral note I feel like might be lavender.

Palate
Unfortunately, I am not getting too many notes on the palate, but it is singing the song of the cask. These notes I am getting are some bitterness from the oak, wood notes – fresh wood, like being in a woodshop, it is a little bit hoppy, and I am getting caramel notes, spice and of course some peat.

Finish
It has a medium finish, and the new make does shine through a bit. Naturally, I am also getting the oak, tannins from the oak, some nuttiness resembling hazelnut and again the peat.

The Ardnamurchan AD/09.20:01 is the second whisky I have tasted in a long, long time, where I cannot find any fruity notes. I feel like it paying tributes to the cask, which is quite alright by me. It is giving me the feeling of sitting by the bonfire down at the beach, darkness creeping in, the sun setting in the horizon and setting the skies on fire. The crisp autumn air is giving me rosy cheeks while sipping this whisky warms me right up again – perfect for this time of year.

Adelphi distillery, owners of Ardnamurchan, was founded in 1826 near River Clyde in Glasgow and later became one of Scotlands largest distilleries. However, the distillery ended up being demolished in 1971, after an incident back in 1906 from which they would never recover. In 2012, the new Adelphi distillery was started, in the Glenbeg Estate on the Ardnamurchan peninsula. They started distilling in 2014, and now, in 2020, the inaugural release is finally here.