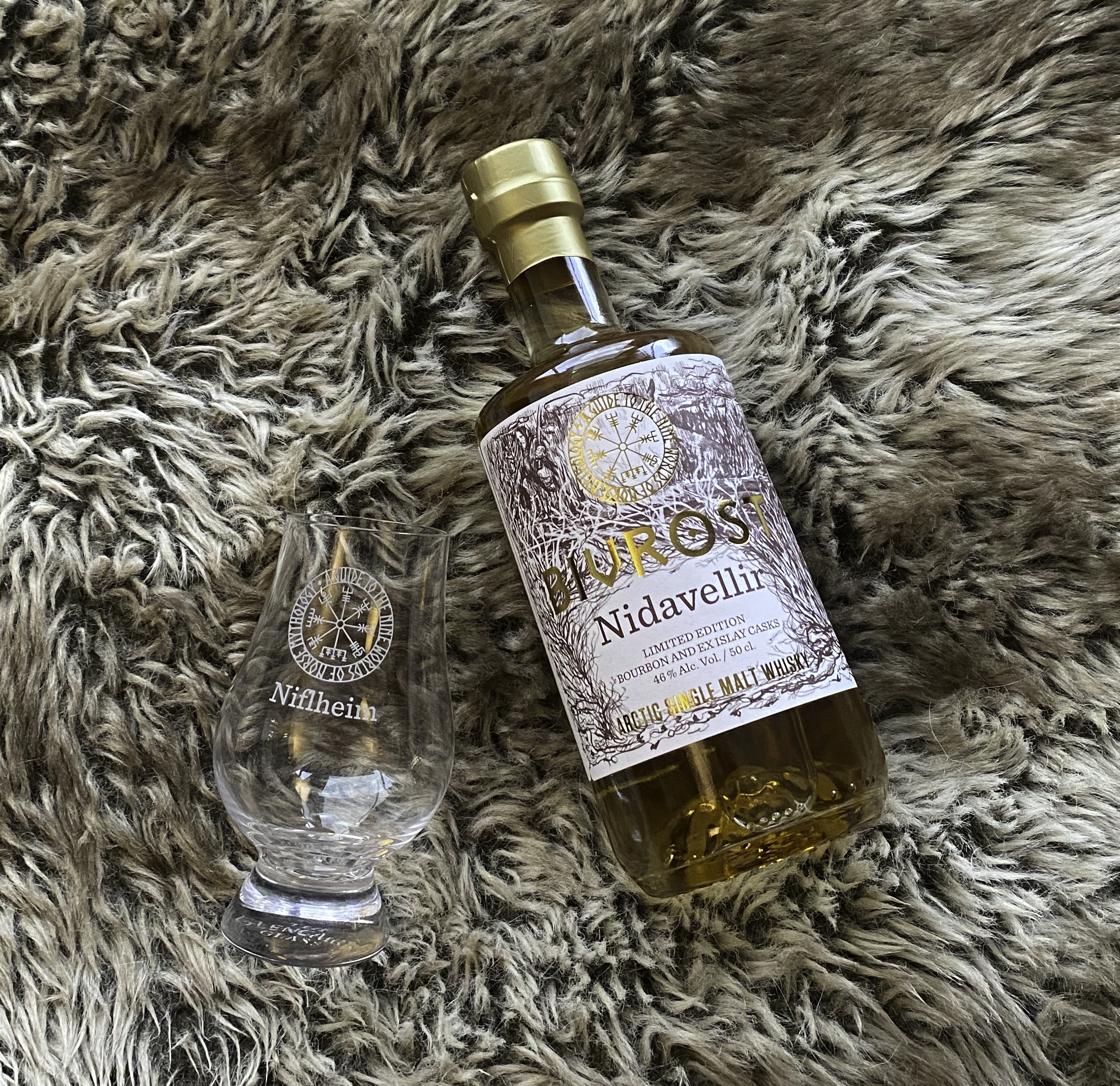 Nidavellir is the second limited edition release from Aurora Spirits, released in Norway, Sweden, Denmark, Finland, Germany, United Kingdom and the Netherlands on November 6th. This particular bottle is number 2393 of 2496, which I am lucky to own.

It has been triple distilled with two active plates in a column still, matured in Heaven Hill bourbon quarter casks and barrels, and finished in French oak casks (initially used by a renowned winery in New Zealand for maturing Pinot Noir) from an undisclosed Islay distillery. The 32-month-old spirit was transferred into the Islay casks in May 2020 for the final 5-6 months of maturation, and it is a pale lemon.

Nose
The nose on this whisky is quite interesting, in a good way. The first note I am getting is fermenting hay, think horses in a stable. Might sound strange, but it is a warm and comforting note. I think this might be a little bit of the new make coming through? Then I am getting a quite prominent malt note, the same familiar whiff of pilsner beer as I got from their last release. From there I am once again brought back to a childhood memory of the wine my parents used to make, with aromas of yeast and fermenting juice, which might be the remnants from the Pinot Noir in this case. Lastly, I am picking up some mellow vanilla notes and also the faintest hint of peat.

Palate
To me, Nidavellir is more balanced than its sister Niflheim, and the fact that it has been finished in ex-Islay casks is quickly recognised by the faint ashy, peaty note, which is a bit more noticeable on the palate than it is on the nose. Yes, it is young, but the alcohol is surprisingly gentle despite its age. It is indeed interesting, as I feel like I have taken a swig of beer without actually drinking beer – that is just how prominent the pilsner malt note is. I might even go as far as describing it as leaving my mouth a little on the dry side, but I might just be confused by the fact that I was expecting some kind of sweet note, which I am not finding at all.

Finish
The finish is medium-long with some complexity, and it warms the throat in a very pleasant way. The pilsner malt note clings to my tongue, with a slightly peaty ending, leaving me with a feeling of just having had a pint of really potent beer, taste-wise.

If you are not the biggest fan of peated whiskies, do not let the “ex-Islay casks” put you off from trying the Nidavellir. It is another youngster from Aurora Spirits, but I am loving what they are doing with their whisky and I am looking forward to the seven next releases in this series.

Aurora Spirit is situated in the Lyngen Alps at 69 degrees north and is the northernmost distillery in the world. Their whisky and other alcohol products are bottled under the name Bivrost, which comes from Norse mythology and is the name of the bridge reaching between Midgard (where men lived) and Asgard (the realm of the Gods).

A huge thanks to Aurora Spirit for kindly sending me this release.
Tasting notes and opinions about this release are strictly my own.