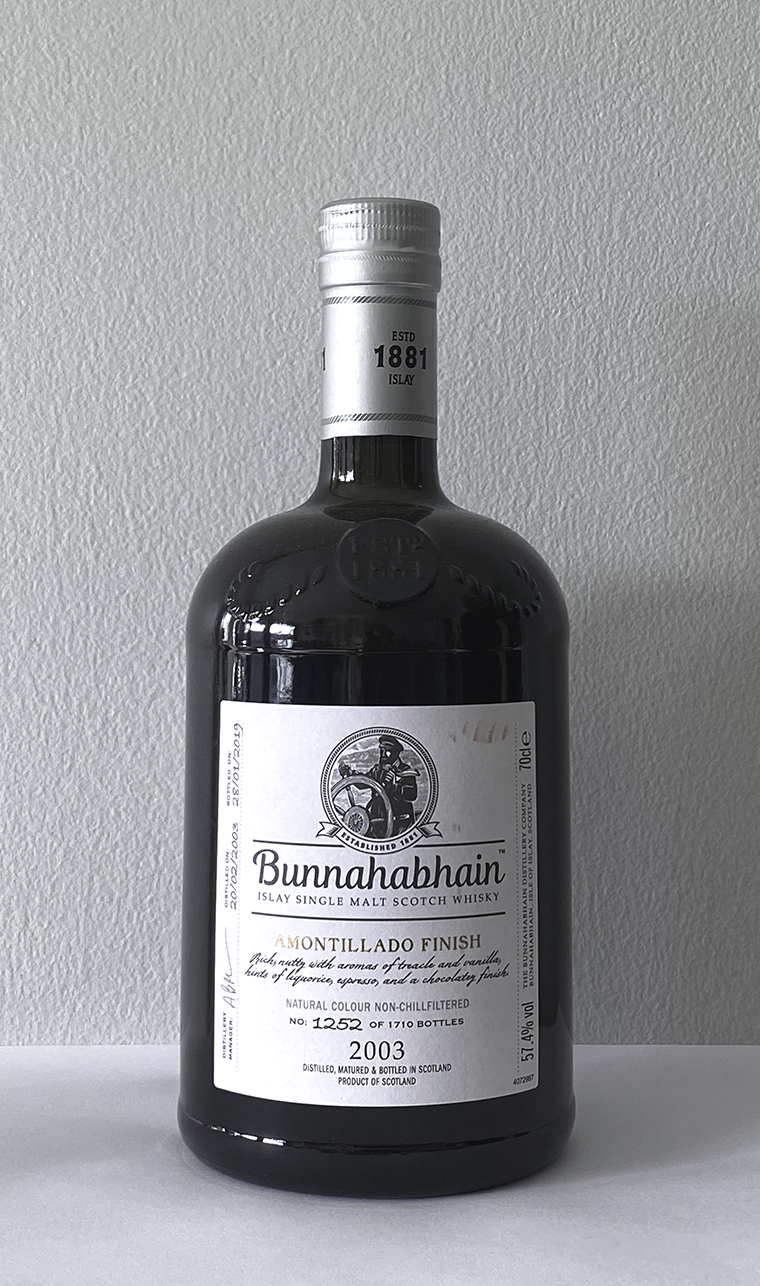 I was invited to join a tasting with North East Whisky Appreciation Society last week, and even though I didn’t have the sample pack to join in, I enjoyed the evening with this group. One of the whiskies they tasted was the Bunnahabhain 2003 Amontillado, which ended up as the clear winner of the evening. And naturally, as a Bunnahabhain fan, it tickled my curiosity enough to order it straight away.

This whisky was started on February 20th 2003 in refill hogsheads before being transferred into rare Amontillado sherry hogsheads on February 26th 2016 for two more years of maturing.

Nose
The Amontillado has a medium, quite mellow nose, despite the high ABV. The first apparent note is the oak or wood notes. Maybe a little raw? Like damp wood. I often get these kinds of notes from older sherry casks. That damp cellar kind of thing. I am also finding roasted caramelised nuts, vanilla and treacle, while those red berries associated with the sherry finish kind of hides in the background. In the end, I am also getting malt, which turns into a lovely biscuity note as it is allowed to breathe in the glass. However, I will go as far as saying that I am a little bit underwhelmed by the nose.

Palate
As with most whiskies with a high ABV (at least to me), the alcohol is a little bit sharp and prickly on the tongue, yet deliciously warming and rich. I am finding some of those sweet dried fruit notes I have become very familiar with from my love for sherry matured and finished whiskies, but it is very subtle in the Amontillado. It is followed by vanilla, espresso with caramelised brown sugar, malt and some liquorice. I feel like something is holding back, refusing to step into the light and make itself known to me, so I am having a hard time describing my experience.

Finish
The finish is definitely the star of this whisky. It is deliciously long with notes of red berries, caramelised nuts, treacle, dark chocolate, a barely noticeable hint of marzipan and raisins. A lot of complexity and the finish has really made up for what I felt like the Amontillado was missing on the nose.

The Bunnahabhain 2003 Amontillado is one of those whiskies I will think back on with a smile. It is perfect for this time of year because of its richness and prominent oak notes. Yet another one of those perfect for sipping by the fire while the rain is gently tapping on the window, and I am slowing starting to discover a pattern to which whiskies I prefer.

The origins of Bunnahabhain, meaning “mouth of the river” in Gaelic, can be traced back to 1879 when William Robertson of Robertson and Baxter Blending House joined with Greenlees Brothers to create the Islay Distillery Company. Bunnahabhain was founded at the mouth of the Margadale Spring in 1883, closed in 1930 and reopened seven years later. In 1963, a second pair of stills were installed to increase capacity, and in 1979 their classic 12-year-old single malt was introduced to the world. The distillery was purchased by Burn Stewart Distillers in 2003, and in 2006 a major rebrand was launched. In 2014 Burn Stewart merged with Distell, and in 2017 their packaging was further modernised and the Distillery Visitor Centre was announced – well worth a visit.