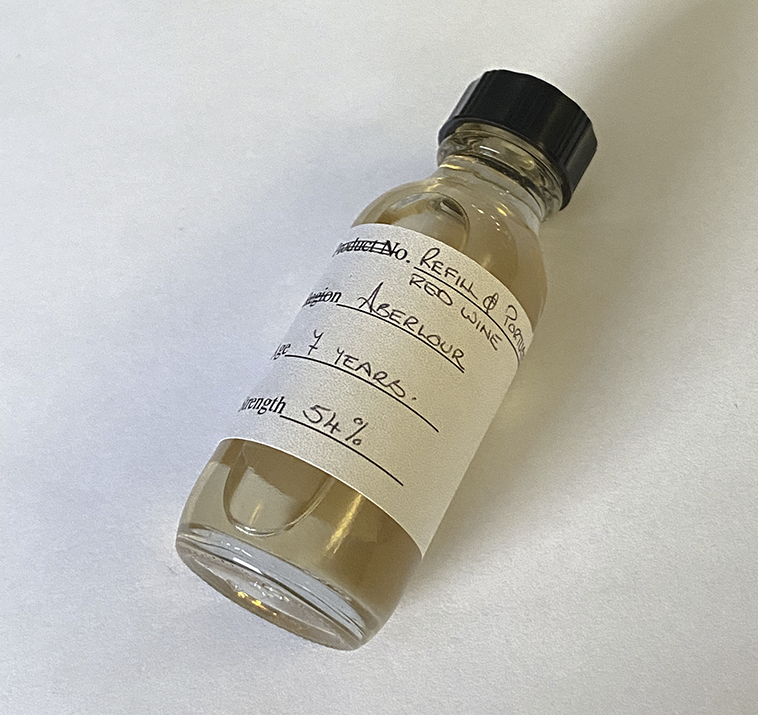 The third whisky by Dràm Mòr is the 7-year-old Aberlour, a Speyside distillery in Aberlour, Strathspey in Scotland. It has been matured in a refill bourbon hogshead for seven years and six months, then four additional months in a Portuguese red wine Madeira barrique, bottled at 54 % and yielded a total of 328 bottles. It is available to purchase from select locations.

I am not a fan of discussing colour when it comes to whisky, but Dràm Mòr describes this Aberlour as “late summer sunset”, and that is exactly the vibe I am getting from this whisky, in both appearance and taste. More about that later.

Nose
The nose on this whisky is light to medium, and it is kind of hard to pin down any particular notes at first. After giving it a few minutes in the glass, I am getting a delicious note of toasted barley, succulent red berries, light oak – or rather the slight bitterness you get from tannins, vanilla, and a hint of something herbaceous, maybe eucalyptus or mint.

Palate
Being a very light whisky, I am finding it a bit shy and difficult to get to know. The alcohol in this young ‘un is a little prickly on my tongue, but it is not bothersome or unpleasant, I am just describing my experience. I am instantly getting a little bit of peppery spice upfront, caramel, vanilla, those succulent red berries, a hint of eucalyptus, and some tannins as one would expect from a wine cask finish.

Finish
The finish is a bit shorter than I would have wished, mainly because I wanted to savour the flavour for a bit longer. The fruit notes are light and disappear quickly, so I am left with a sweet and creamy oaky note and a little bit of salty caramel and spice, the same whiff of florals you would get from walking past a fragrant bouquet, ending in a little bit of mint.

As I might have mentioned a couple of times on my blog already, I do prefer my whisky to be viscous, heavy and full-bodied. This one is shy, blushing, and it is honestly impossible to resist its charm.

Its colour and light summery notes are taking me back home to where I am sitting on my parents’ balcony, just enjoying the quiet calm of a northern summer’s night, sipping on this one – and for the first time in a long time, I feel homesick.

Dràm Mòr Group Ltd. are family Scotch single cask whisky bottlers, choosing individual casks to showcase the best of every Scottish whisky, originating from the once highly influential town of Dumbarton, which rests in the shadow of its iconic Rock, Dumbarton’s medieval Castle, an ancient capital of the Kingdom of Strathclyde, and which boasts such whisky legacy as Ballantine’s and is home to Pernod Ricard’s Chivas.

A huge thanks to Dràm Mòr for kindly sending me this sample.
Tasting notes and opinions about this release are strictly my own.